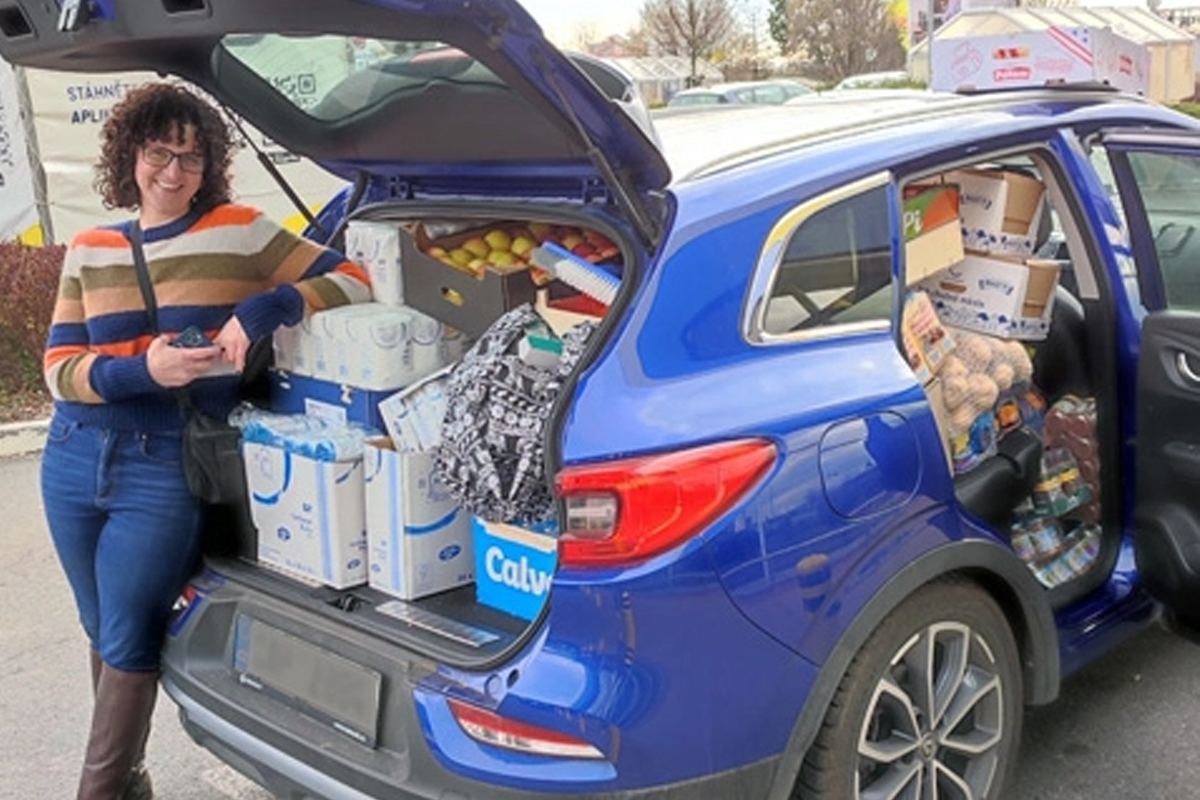 In the weeks following the invasion of Ukraine on February 24, 2022, more than 300,000 Ukrainian refugees, mostly women and children, made their way to the Czech Republic. Many ended up in Prague with only the clothes on their back and whatever else they could carry.

Refugee centers sprang up around the city, including in the building across the street from Graebel’s regional EMEA office. Casey Phelps, Senior Vice President, led the Graebel relief efforts for Prague and surrounding regions.

There was also an outpouring of empathy from Graebel employees whose relatives had been refugees in the past or who had present ties to relatives in the country of Ukraine. “Right away, I could see that this situation was affecting our people deeply and personally,” Casey recalled. "We all wanted to help.”

To that end, Casey and others in the office donated food and clothes to the refugee center. While making those drop-offs, she had the chance to meet some of the recent arrivals.

“I put myself in their shoes,” Casey recalled. “How would I feel, arriving in our city with basically nothing? I’d be confused, worried about whether I could take care of my children and keep them safe. I’d be frantic about family members still in Ukraine. I’d struggle to understand my options or the best plan for tomorrow, let alone the next week or month.”

Casey realized their situation required her to do far more. With support from many in our Prague office, she mobilized a local relief effort.

“All of my Graebel colleagues here in Prague did what they could financially and otherwise to help. At the height of the influx, for example, team members volunteered to meet refugees at the train station to welcome them, answer their questions and make sure they got to their local destinations safely.”

Casey also began a personal fundraising campaign, reaching out to friends, family and her social media networks. With these funds, she purchased bulk quantities of the most critical personal essentials: baby food, clothes, toiletries, hygiene products, toys, Wi-Fi extenders and much more.

She delivered these items to refugee centers around the city and provided supplies to a group of women who made regular trips to the Ukraine border to drop off necessities.

At the time this post was written, Casey had raised more than US$13,000. She also coordinated a sizable grant from Graebel for the Czech non-profit, People in Need, to support similar refugee services.

The refugee stream has slowed, and some have returned home. The personal needs have evolved for those who have stayed in Prague. For example, Casey recently used some of the remaining funds to buy sewing machines for several of the refugees she’s met. It also became very apparent that the Ukrainian children who remained needed to return to some sort of normalcy to cope with the stress they endured. They also needed to resume their education, so Casey coordinated with Graebel to obtain laptops for many of them. She also supported a new non-profit organization located near the Graebel office that provided Czech and English language training for the Ukrainians who plan to stay.

“Some might say what I or my Graebel teammates have done is a drop in the ocean,” added Casey. “That’s true, it’s a small part of a much bigger picture. Some have done far more, of course. But a lot of people doing little things to help makes a big difference. I always want to be one of those people.”

Read more about how others helped with the Ukraine refugees in the Czech Republic.

Getting to Know Casey

Casey has served in the global mobility industry since 2004 and has been with Graebel for nine years. A native of St. Louis, Missouri, Casey was hooked on living abroad as an exchange student, living and attending high school in Bremen, Germany for one year. She’s been based in the Czech Republic since 2012.

As a Senior Vice President, Casey oversees onboarding Graebel’s new clients in the EMEA region, directs the various operations that support international relocations into the region, and ensures that sufficient resources are assigned to each account to provide exceptional client and employee experiences.

In her spare time, Casey enjoys cycling and Pilates and is trying to learn the Czech language so she can apply for citizenship. At this point, though, she admits her two cats may understand Czech more than she does.