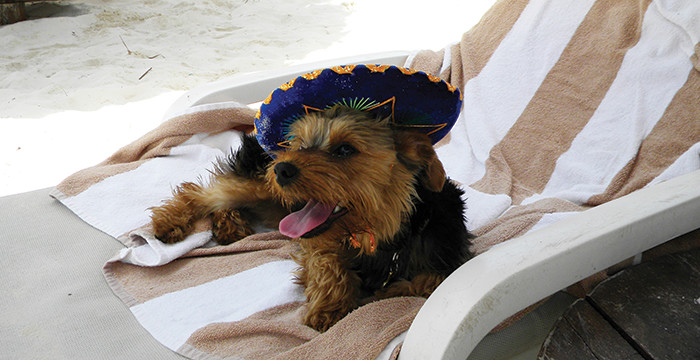 During an emergency evacuation of all U.S. citizens from Libya, an expatriate family made the very difficult decision to leave their family pet, a Yorkie named Chivu, with a neighbor family. However, just days later they learned that the neighbor had left the dog with a local veterinarian. Since the assignee was working with Graebel for their relocation, the family reached out to their Graebel consultant to find out if it would be possible to rescue Chivu.

Even though the Graebel representative was also at this time handling the unexpected relocation of the family to Cancun, Mexico, he did not lose track of this very important assignment.

Find, retrieve and deliver a family pet left behind by a client’s assignee when the family left Libya during an emergency evacuation.

Fortunately, the family had the name of the veterinarian where the neighbor had left Chivu. Armed with that information, the Graebel representative:

Remarkably, one week later the representative received a call from a woman in London whose daughter worked in the veterinarian office in Libya where the dog was being housed. An exchange of pictures confirmed that Chivu was indeed there, along with 50 other dogs scheduled to be evacuated to Malta, the U.S.- sanctioned location.

After reaching out to his personal network and through social media to find someone in Malta who could help on that end, he connected with a former university classmate who was able to send Chivu on the next leg of his journey.

Knowing that Mexico law requires that an animal be accompanied by a person into that country, the representative contacted one of Graebel’s vetted animal carrier service providers, and the CEO of that company agreed to personally accompany Chivu to Cancun from Orlando.

Ultimately, Chivu traveled more than 7,000 miles (from Libya to Cancun, via Malta and Orlando) before being reunited with his family. During his month of travel, Chivu had no idea of the daily efforts made on his behalf by the Graebel representative — investigation, correspondence, late night calls and of course near daily communication with his owner. The remarkable story ended well and it’s a very good example of how Graebel employees are empowered and guided by our customer service theme: “What to do you need? How can we help?”